David Kordansky Gallery is very pleased to announce like the land loves the sea, an exhibition of new work by Mary Weatherford. The show, which will take place across three of the gallery's exhibition spaces, will open on March 10 and remain on view through May 6, 2017. An opening reception will be held on Friday, March 10 from 6:00pm until 8:00pm.

Mary Weatherford has become increasingly recognized as one of the leading painters of her generation, as well as one of the most astute and daring practitioners taking on the legacies of American abstraction. As she explores and expands the medium's possibilities, she honors its history by seizing opportunities to break with tradition at every turn. Her notable incorporation of sculptural elements--including the neon tubes that have been a constant presence in her work over the last five years--as well as her fearless and physically embodied approach to painterly gesture, have allowed her to envision abstraction as both a formal language and a poetic, highly personal mode of engagement with the world outside the studio.

This exhibition features some of Weatherford's largest paintings to date, including four mural-sized canvases installed together in one of the gallery's two main spaces. In the other, she will present a series of large-scale vertical paintings, each of which is generally defined by a single dominant hue. Both typologies contain gestures, color combinations, paint handling, and compositional moves that constitute advances in the artist's practice and distinguish the paintings from previous bodies of work.

While the scale of the paintings alone connotes a broadened sense of scope, Weatherford's brushstrokes have also increased in size, so that they imply the presence of the entire body rather than just that of the hand. The forms that result therefore take on a new monumentality, occupying and defining the space of the paintings as if they were bodies themselves. This is in keeping with Weatherford's approach to mark-making; gestures bristling with speed and immediacy are the final articulations of a process that begins with the negotiation of psychological moods, pointed art historical reflection, and even meditation on current world events. As such, they are entrusted with carrying the fullest possible array of sensory and intellectual experiences.

For these reasons, the notion of scale in the new works refers not only to the quantitative space in which marks are inscribed, but to a qualitative sense of movement. Gestures become vehicles for the application of expansive swaths of color. Weatherford also experiments with arrangements and ordering of hues, employing lighter colors to sculpt darker ones. While this is a common strategy when using oil paints, Weatherford uses the vinyl-based Flashe medium; since its weight and viscosity can be altered with water, darker tones are usually applied after lighter ones. But here this structure is often reversed, with pale, transparent colors sitting on top of solid dark ones, and aura-like washes creating an uncanny sense of depth through the layering of luminosity. These effects are enhanced by Weatherford's recent use of metallic paints, which reflect light in unpredictable ways, and further communicate movement and the shifting nature of ambient conditions.

Compositionally, the works in the exhibition take a variety of forms. They include diaphanous fields in which open shapes appear to flow through and around one another; austere, severely articulated swarms of marks; and dense, all-over clouds of color punctuated by linear traces of the artist's brush. In the open spaces delineated by the murals, these variations are combined to create map-like expanses that seem to encompass the entirety of the viewer's peripheral vision. As the gaze moves from one passage to the next, the interactions between each of the local parts are synthesized as a kind of extended visual narrative. The vertical paintings, meanwhile, find Weatherford choreographing discrete shapes so that they adhere to and repel each other with erotic force. Neon tubes--and the diverse kinds and colors of light they emit--either sharpen the focus of the painted elements or destabilize them further. By projecting their light into the exhibition space, and because they are joined by precisely arranged cords to power sources (which are in turn connected to the wall), the tubes offer a host of metaphors for what it means to exist in physical space as a participating entity and not merely an observer.

Accordingly, Weatherford's ambitious sense of range is not limited to her formal concerns. With many of these paintings finished in the weeks and months following the U.S. presidential election, they are born of emotion, consternation, puzzlement, and contemplation of the natural world, whose constancy is rooted in change. But this does not mean that the artist seeks to offer sweeping pronouncements; rather, as she executes her compositions with speed and improvisatory abandon, she shows how encompassing vistas of daily life are generated on a moment-to-moment basis. The paintings alternate between the atmospheric and concrete, and give form to the complex interweaving of sentiment, perception, and insight of which meaning is made. Their range, then, is the range of consciousness as it alights upon the tangible facts of the world, fusing itself to the materials it encounters and transforming what it sees, even as it is transformed. 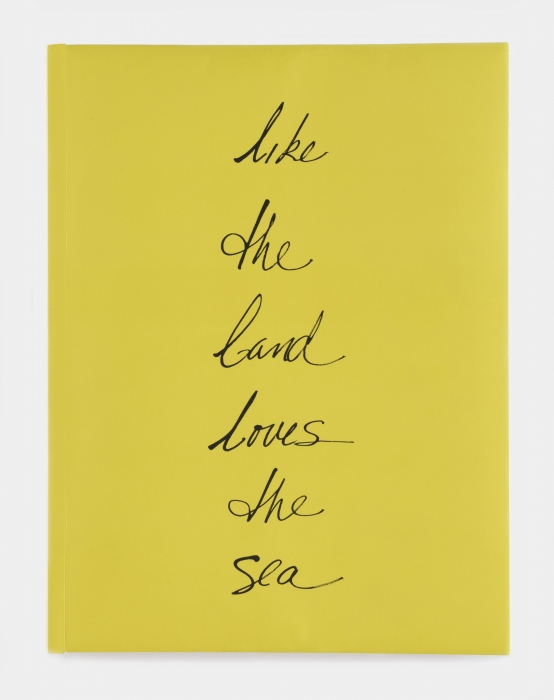