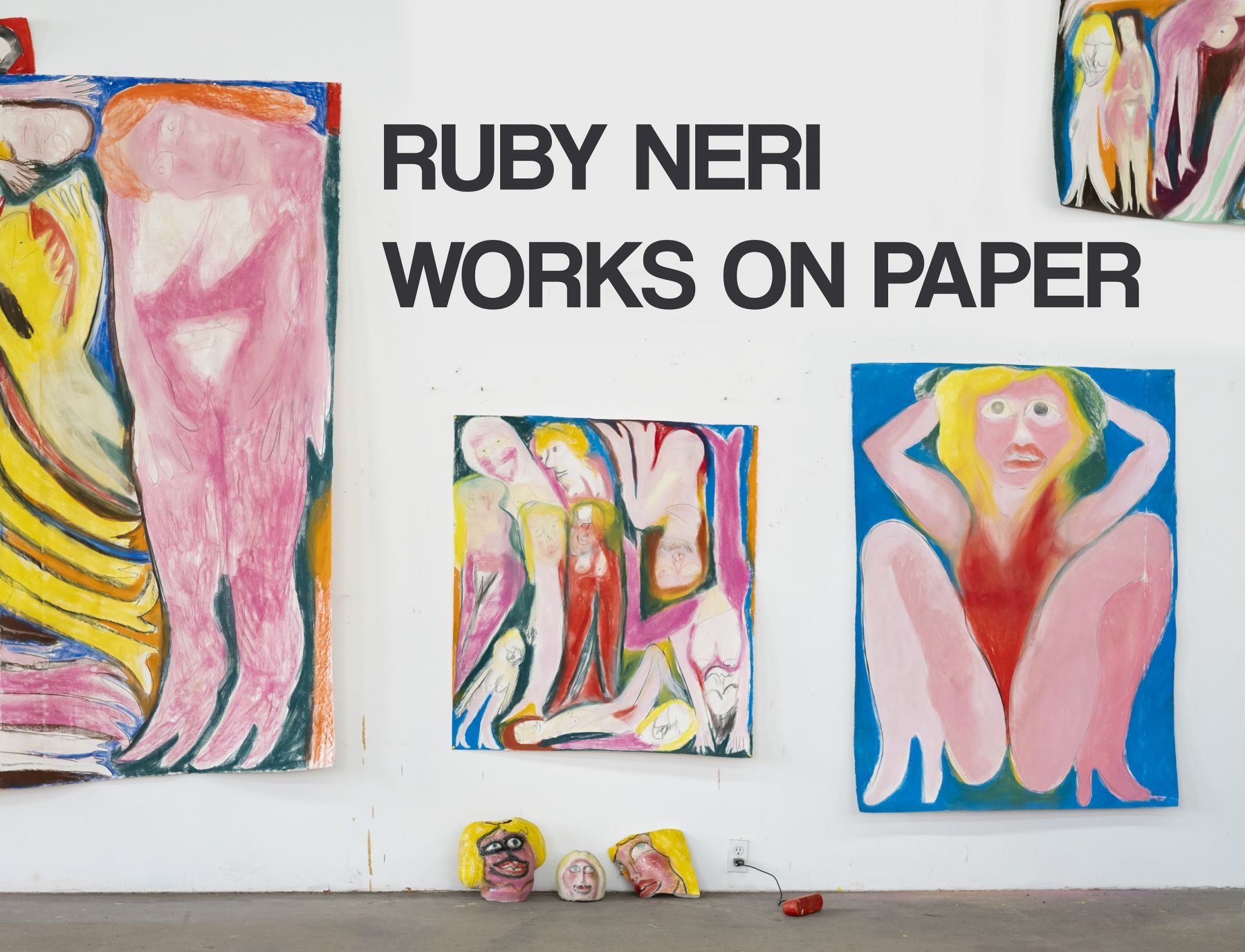 David Kordansky Gallery is pleased to present Ruby Neri: Works on Paper, an exhibition of recent pastel and pencil drawings. The show will be on view through Saturday, February 29, 2020, 6:00pm Pacific Time.

Ruby Neri: Works on Paper is now closed. To inquire about available works by Ruby Neri, please send us an email here, or click "INQUIRE" below. 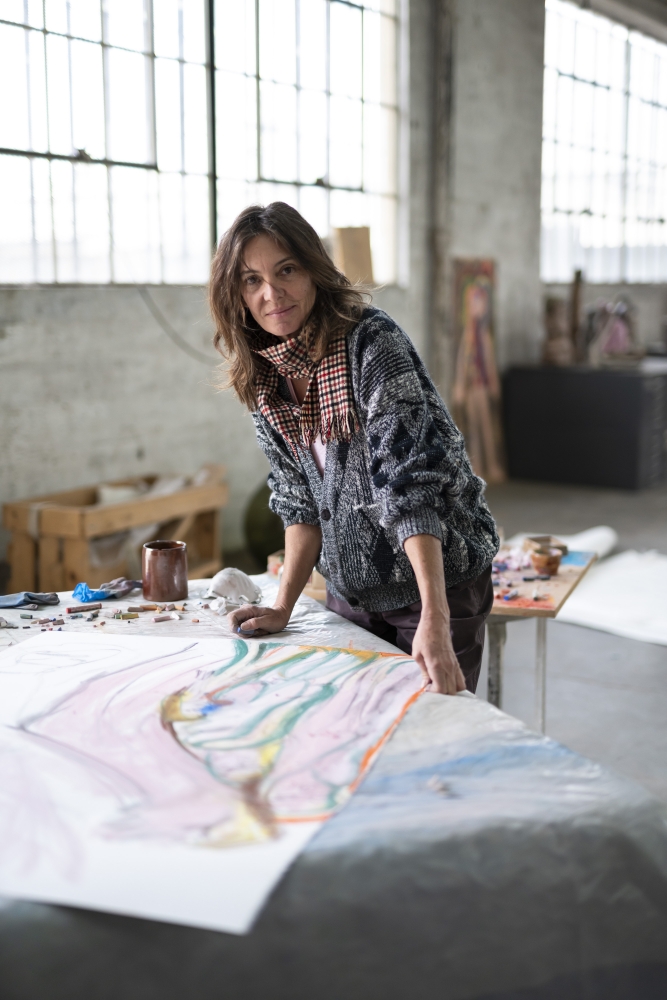 In recent years, Ruby Neri has become known for ceramic sculptures born of an ecstatic, humorous, sexually charged, and formally complex vision of the female body. She has concurrently been using pastels and pencil to produce two-dimensional works that take on related thematic material. Working against the backdrop of modernist legacies of painting and drawing––including Bay Area Figuration, Fauvism, and German Expressionism––she develops compositions in which her figures and their environments are united in fields of swirling color or tone. Bodies and the surrounding atmospheres are, if not indistinguishable, revealed to be parts of the same abiding force, one whose various articulations materialize not only as visual phenomena like shapes and textures, but also as emotions and moods.

Neri’s new pastels can be divided into two basic types, with some depicting groups of women arranged in tableaux that favor loose geometry and abstraction over representational realism, and others devoted to single, monumental characters that display clear links to her sculptures. Her pencil drawings bridge both elements in their intricate narrative motifs: all-over, chiaroscuro-like rendering animates each visionary scene as perceptual pattern and form. Works from this intimately scaled series were featured in a 2018 two-person exhibition, with Alicia McCarthy, at the Berkeley Art Museum and Pacific Film Archive. 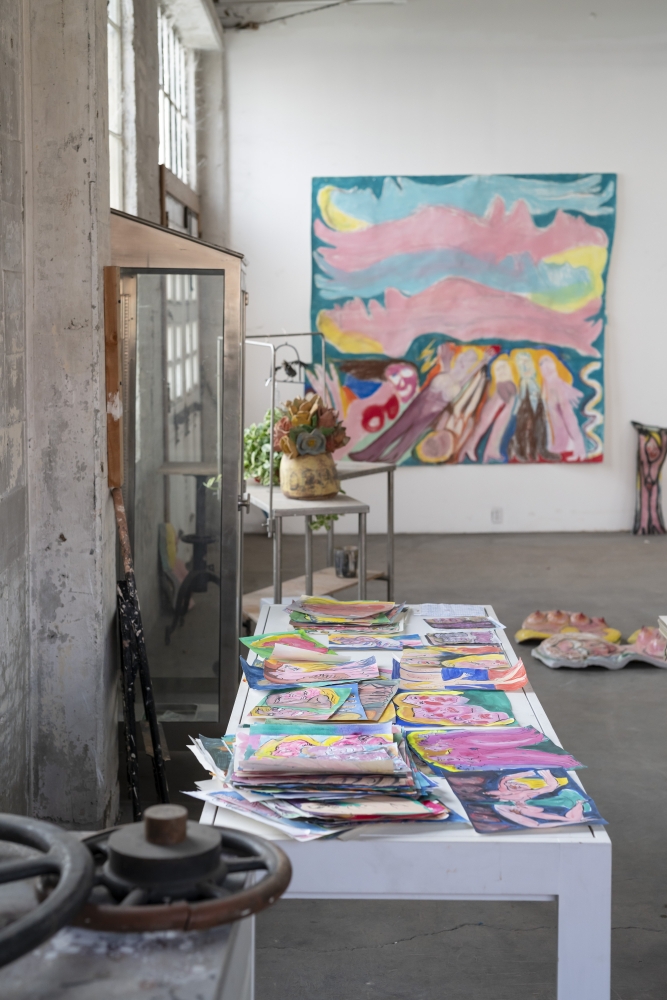 Painting and drawing have been integral parts of Neri’s project since the beginning of her career, including during her formative years as a street artist in San Francisco, where her images were inscribed on the outdoor surfaces of the urban landscape. Over the last 15 years, she has made groups of oil paintings and drawings in various media, allowing images and mark-making strategies to flow freely between her flat and sculptural works. Of course, the ceramic, vessel-based objects that have garnered much acclaim recently are as defined by their bravura drawing and painting—Neri engraving their surfaces and spraying each with glazes—as they are by their sensuous, biomorphic volumes.

Aside from their merits as bold experiments in composition, and as open documents in which sex and vulnerability are given freedom to roam, the artist's works on paper are testaments to the true breadth of their creator’s vision. While Neri focuses on the body as a centralizing trope, her ultimate subject is an entire world, one where creativity and abundance are the sources of power, and ferocity is woven through with joy.

“People have told me that these characters are intensely threatening or aggressively sexual... I don’t see them as hypersexual, though. They’re a fractured character dealing with hierarchies, power struggles.”

"At this time in my life and my work, I am very drawn to...the female emotional world and psyche, and the physical manifestations thereof, in all their complexity."

“People have told me that these characters are intensely threatening or aggressively sexual... I don’t see them as hypersexual, though. They’re a fractured character dealing with hierarchies, power struggles.”