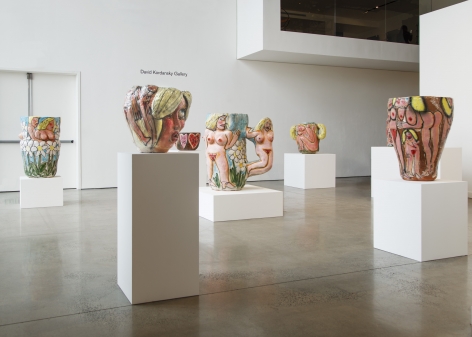 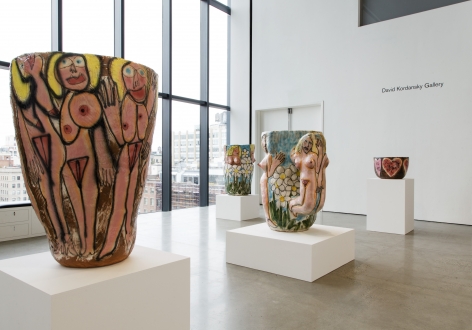 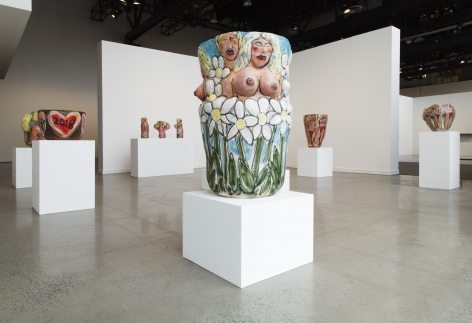 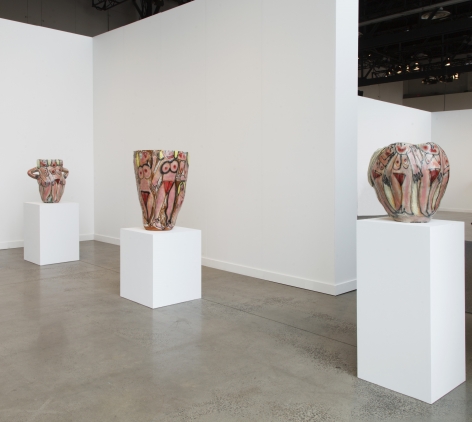 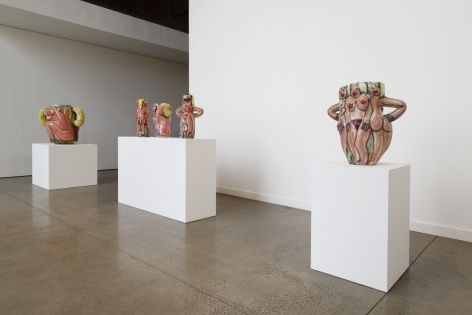 Ruby Neri has pursued a wide-ranging path since the beginning of her career, privileging freedom of expression and direct appeal to the emotions in a variety of mediums. She often depicts the human body as a porous instrument of pleasure, terror, and everything in between, placing her within a lineage of recent Los Angeles-based artists that includes Mike Kelley, Paul McCarthy, and Charles Ray. At the same time, Neri's penchant for hand-driven craft, and particularly her use of clay, connect her to the Bay Area Figurative and Funk movements. The ceramic vessels that have dominated her production over the last few years evoke an earthiness and intimacy that translates at every size, from the monumental volumes that enter into direct relationship with their viewers' bodies to doll-like, table-top objects.

This intimacy is driven by the objects' physical as well as their graphic presence. The women Neri depicts are locked into complex, swirling arrangements, their body parts wrapped around one another. Several works feature sculptural elements that accentuate these compositions further. Lengths of braided hair and bent arms function as chunky handles that cascade away from the walls of the vessels and through open space, and curvaceous contours lend pots dramatically undulating walls. Furthermore, the surfaces of the vessels are covered with dense arrays of scratched textures that recall the marks animating ancient graffiti sites in the Near East. Their massing and solidity is therefore offset by a sense of speed compounded by Neri's decision to apply her glazes using an airbrush--a decision that can also be traced to her formative years as a street artist associated with San Francisco's Mission School.

Many of the newest vessels have been glazed a blush, high gloss pink. If earlier works of this kind traded in an archaic, even primitive rawness, Neri has opted here, especially in her color choices, for something veering in the direction of Pop. Viewers will notice that all of the figures have blonde hair; Neri thereby alludes to the idealization of feminine beauty, while also cannibalizing and reconfiguring it, transforming it into something that is at once more realistic, embodied, and ravishing. In several cases she has even augmented the vessels with bulbous, heart-shaped forms and areas of bold primary colors. As a result, the work feels more effusive than ever, and more confrontational. Neri's decidedly bold approach to representing her figures' sexual anatomies, for instance, becomes a joyous, often hilarious, but always decidedly human way to envision gender and life's powerful biological imperatives.