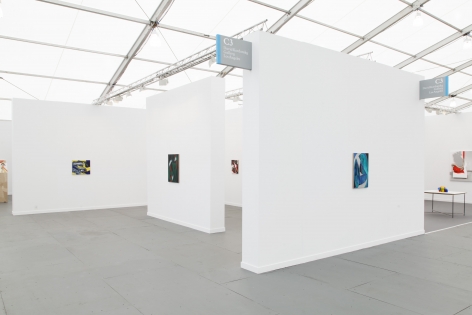 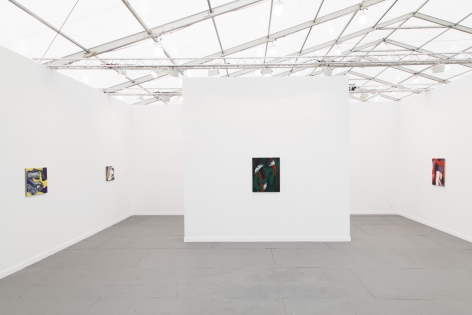 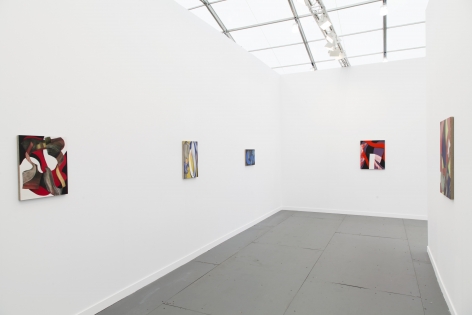 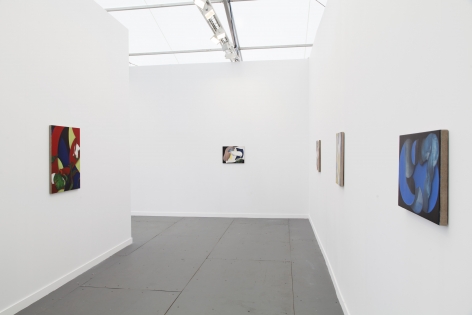 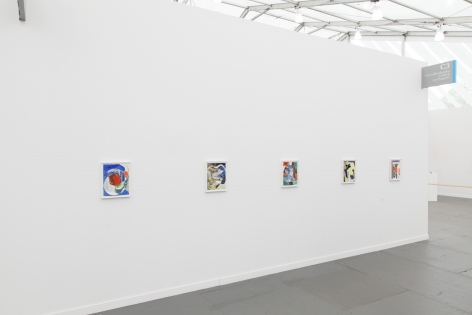 David Kordansky Gallery is pleased to announce a solo presentation at Frieze New York of new work by Los Angeles-based painter Lesley Vance. One of the gallery's founding artists, Vance has developed a singular abstract language, a portrayal, romantic yet exacting, of plastic space as a surrealist pictorial continuum. Her new paintings and collages, featuring her boldest colors and most graphic gestures, appear unmoored from worldly referent while according with, and flouting conventions of optical construction. Materially flat, they depict non-objective forms with emotive sensuality and dramatic finesse.

Vance's oil on linen pictures unwaveringly occupy the personal scale of a window; her largest abstract paintings to date, on view here, only stretch 30 inches in one direction, and most measure less than 20. Within these intimate bounds, intricate depths unfold: Ribbon-like fields of flat color abut, overlap, intersect, and meld into fine-haired painterly strokes and swath-like expanses. The borders of these forms are at once hard-edged and porous. Like brushwork Möbius strips, they are at turns sharply discrete while also flowing and fading into each other.

Throughout, Vance delineates her forms as much by their internal patterning as by neighboring contours or seemingly imposed line; for example, a form's outer edge follows the "natural" curvature of a brushstroke, or appears cut entirely independent of this grain.

Adding illusionistic effects like drop shadows and highlights to the edges of her forms, as well as chiaroscuro-like modeling, Vance further conjures perceptual labyrinths. Depicted shapes simultaneously appear as fragmentary forms and fragmentary views of space, i.e., both as figures and slivers of ground. In particular, negative spaces take on positive presences; apertures look both recessed and superimposed. Lines and colors extend freely between forms, again paradoxically suggesting both retinal continuity and distinction.

Vance’s new paintings focus her meticulous working process on the intense interplay between colors sharing a surface and field of view. She patiently pieces and parses the ramifications of color considered as a pictorial as well as painterly object, subject and sensitive to the representation of volume and light. Her approach, which has always studiously drawn upon art history's tertiary masters, simultaneously elicits the magic realism of Konrad Klapheck, the cut-and-paste gestures of Lee Krasner, and the chromatic dimensionality of Ken Price, while similarly evoking the hyperreal theatricality of baroque sculpture.

An accompanying series of new collages further probes the vagaries of constructing space from color and form. Excising vignettes from her radiant and lush watercolors, Vance pastes one or more of these fragments onto other finished full-sheet watercolors. These sharp-edged layers seem to uncannily "fit" the abstract picture, chromatically and compositionally. However, this relation is Vance's virtuosic fabrication, another seductive fiction, with the eye as her willing accomplice.