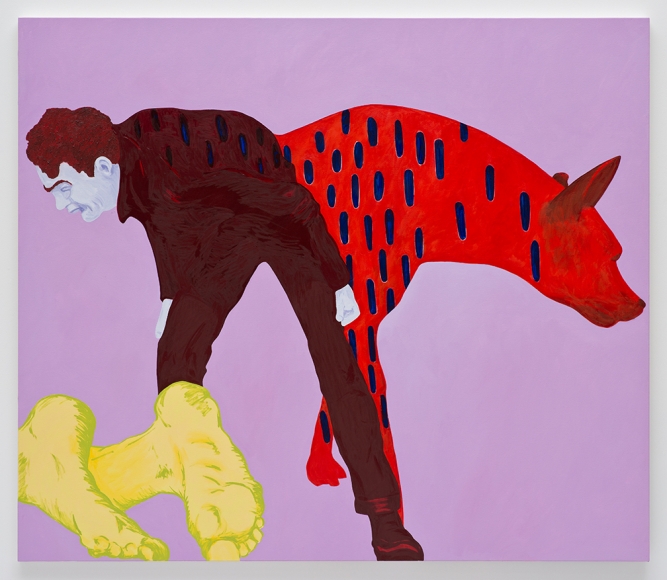 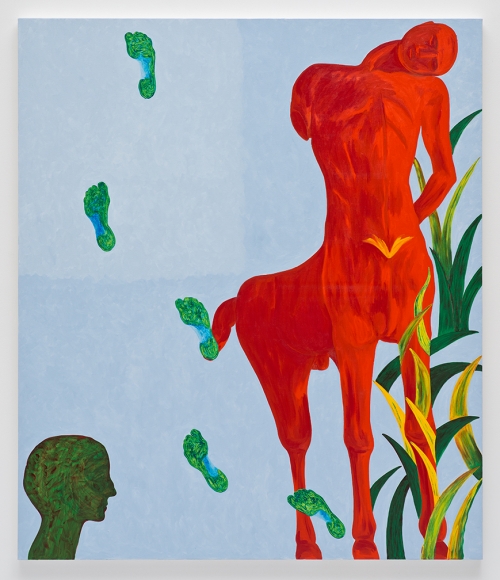 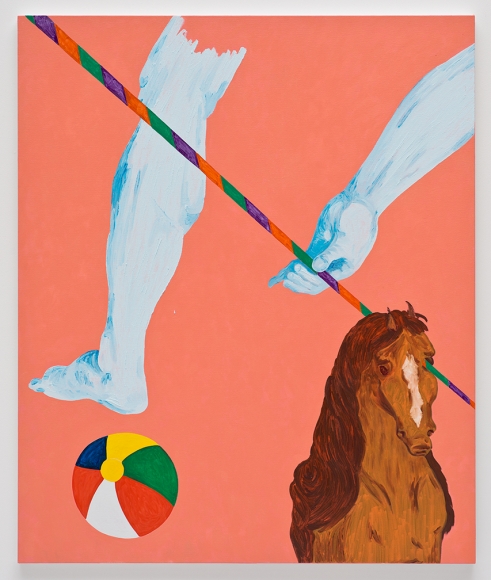 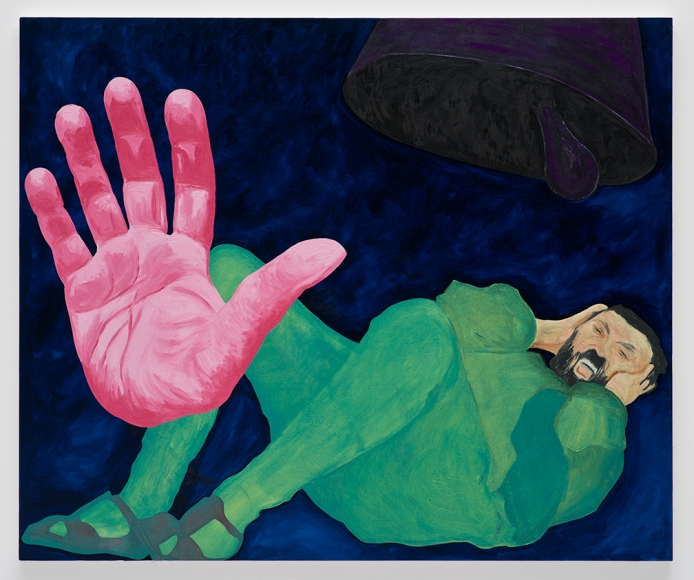 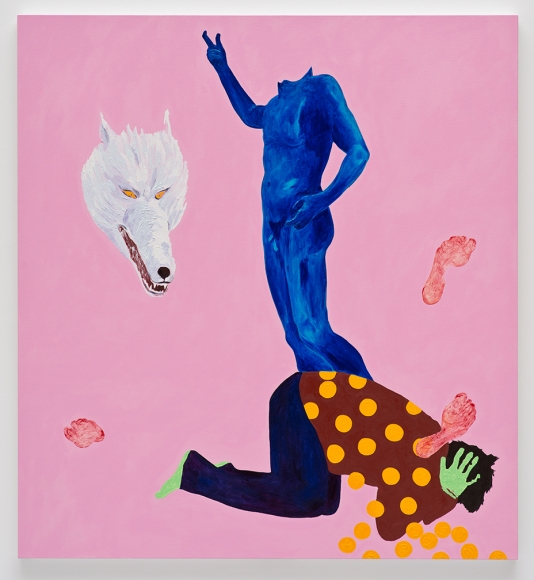 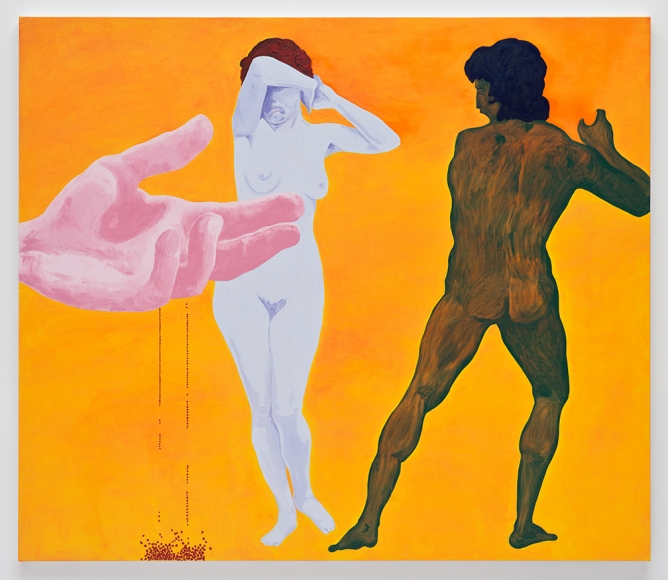 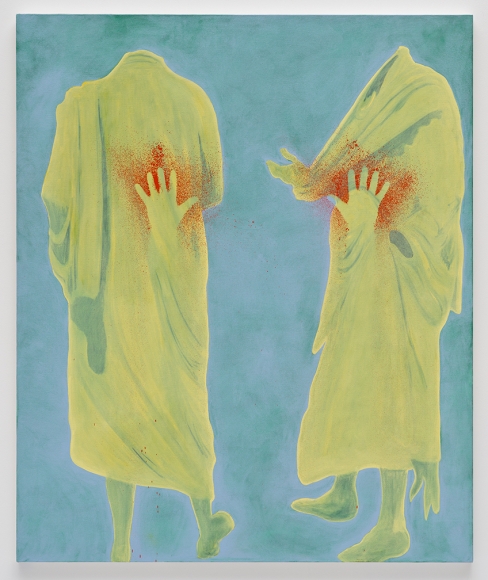 David Kordansky Gallery is very pleased to announce In the Shadow of the Beast, an exhibition of new paintings by Thomas Lawson. Consisting of medium- and large- scale canvases, the show presents the latest developments in Lawson’s on-going investigation of allegory and the human figure. The exhibition will open on September 8 and run through October 20, 2012. An opening reception will be held on Saturday, September 8 from 6:00 until 9:00pm.

For over thirty years, Lawson has explored the ways in which figurative representation allows for––and sometimes disrupts––the transmission of meaning. He has shown how images of the human form in art invariably take on a host of allegorical possibilities: the immediate, phenomenological pose of the viewer’s own body before the artwork; the manipulated presence of the human figure in contemporary media outside of the visual arts; and the long, historically-oriented ‘literature’ of representations that has, over the centuries, become the foundation for understanding how subjects relate to their physical, social, and philosophical environments. The references in Lawson’s work are drawn from the entire history of visual culture.

In the Shadow of the Beast presents new paintings that borrow tropes and forms from pre-historic cave art, classical statuary, nineteenth century figure studies, forgotten modernist sculpture, and contemporary newspapers. Over intensely colored grounds, Lawson combines, collages, and rearranges these forms, rendering them in an array of different brush marks and viscosities. At times they stand out from the grounds in stark relief, as in a painting entitled Voluptuous Panic, in which a startling image of a werewolf’s head has been brushed onto a flat, pink field.

On other occasions, figure and ground are blurred, as geometric patterning in the form of discs, drops, lozenges or stripes spreads across them both. In these cases, the entire surface of the work becomes a single, variously articulated plane, as if the reductive endgame of abstraction in painting had given birth to a hybridized, and at times grotesque, new form. As the distinction between the figurative and the abstract reveals itself to be a difference of degrees, the work calls into question any preconceived notions about the evolution of painting from one approach to another. Rather, the tension between these modes is shown as a defining feature of the medium.

Lawson balances research and careful composition with an experimentalist’s approach to the making of his work, so that the always-uncertain translation from idea to material is allowed to produce surprising results. This can be seen in paintings whose elements interfere with the spatial universe in which other elements reside. In Walking on Water, for instance, ghostly feet traced from the artist’s own footprints track across a blue field otherwise occupied by a centaur and a portrait bust; the ground becomes both a pictorial space and a ground for performative action. Here painting, even absent of image, is shown to be an essentially figurative activity––an instructive tool for decoding the degrees to which media are by turns disembodied or aggressively physical.

Because they conflate such a wide array of representational approaches and sources, Lawson’s paintings reflect the broadest––and appropriately paradoxical––array of psychological responses to a complex world. On view are human figures who morph into animal shapes, or pose in comically contorted positions, making it impossible to determine whether their anguish is pure theatre or a fitting response to external stimuli. When juxtaposed against other figures drawn from historical contexts, these characters enter into an allegorical play that seems to account for all the ambivalences associated with contemporary culture, as well as the ever-persistent drive to represent it.

Thomas Lawson has been featured in numerous exhibitions over the last three decades. Surveys devoted to his work have been held at the San Diego Museum of Contemporary Art at La Jolla, the CCA in Glasgow and the Battersea Arts Centre in London. Other solo exhibitions include shows at Participant, Inc., New York; LAXART, Los Angeles; Metro Pictures, New York; and Anthony Reynolds Gallery, London. Lawson was featured in The Pictures Generation: 1974-1984, a major 2009 survey exhibition at the Metropolitan Museum of Art, New York. His work is currently on view, through September 2, in Made in L.A. 2012, the first Los Angeles biennial, Hammer Museum, Los Angeles. In addition to this rich exhibition history, Lawson has authored or edited many essays, anthologies, and periodicals, including, with Susan Morgan, the seminal REALLIFE Magazine. Mining for Gold, an anthology of Lawson’s writing, was published by JRP|Ringier in 2005. Lawson is the Dean of the School of Art at the California Institute for the Arts, and editor-in-chief of East of Borneo.