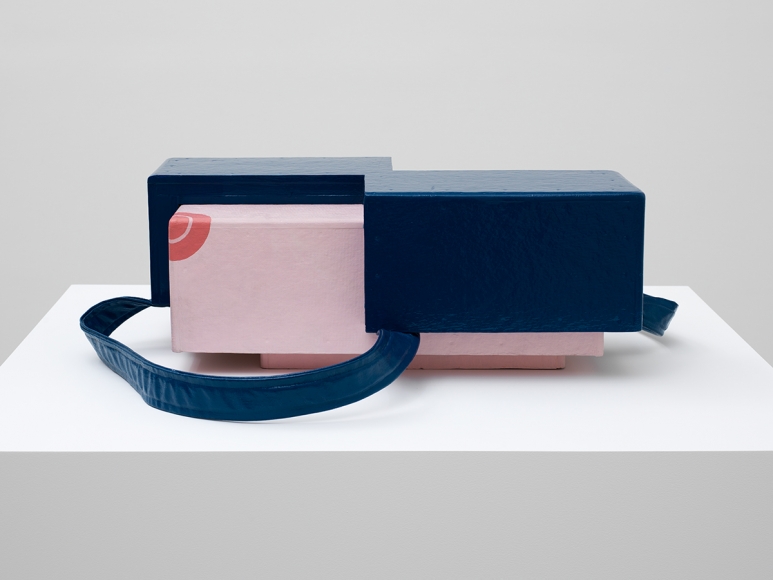 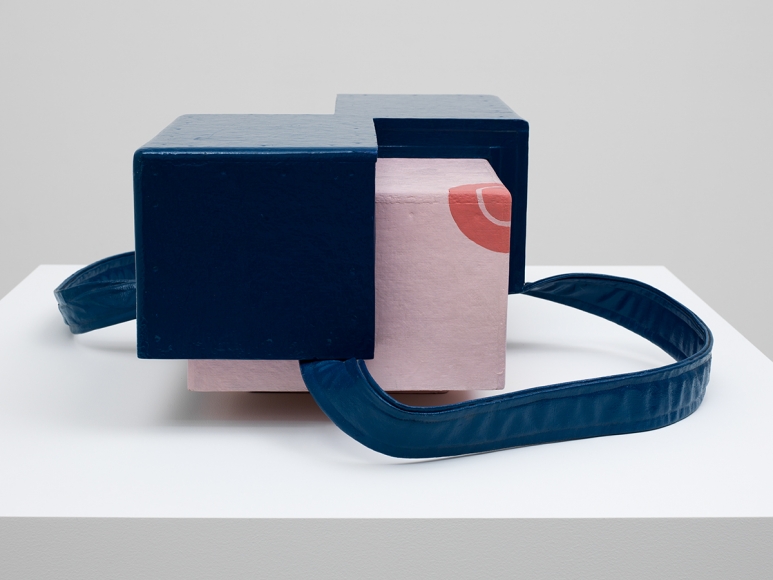 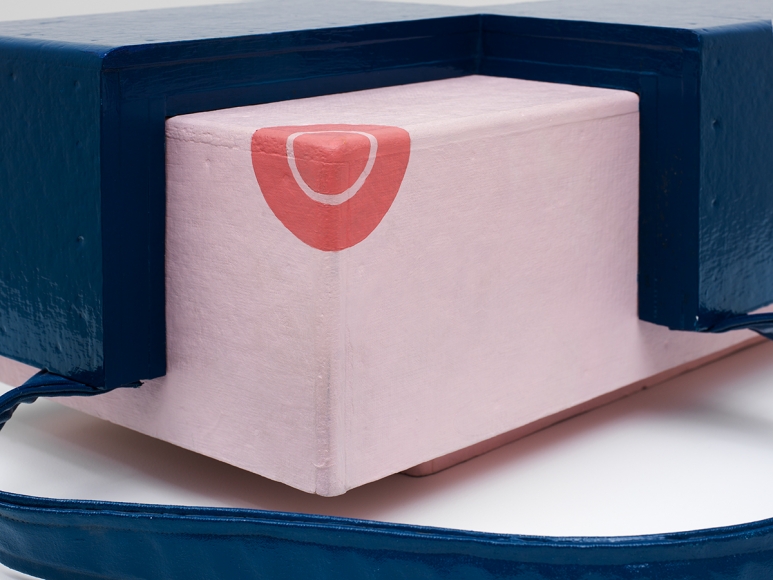 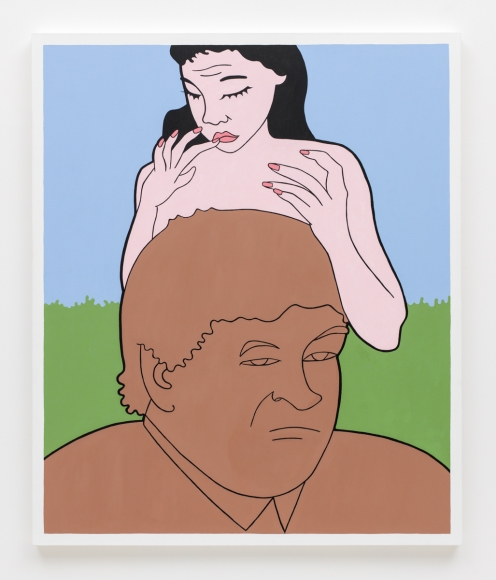 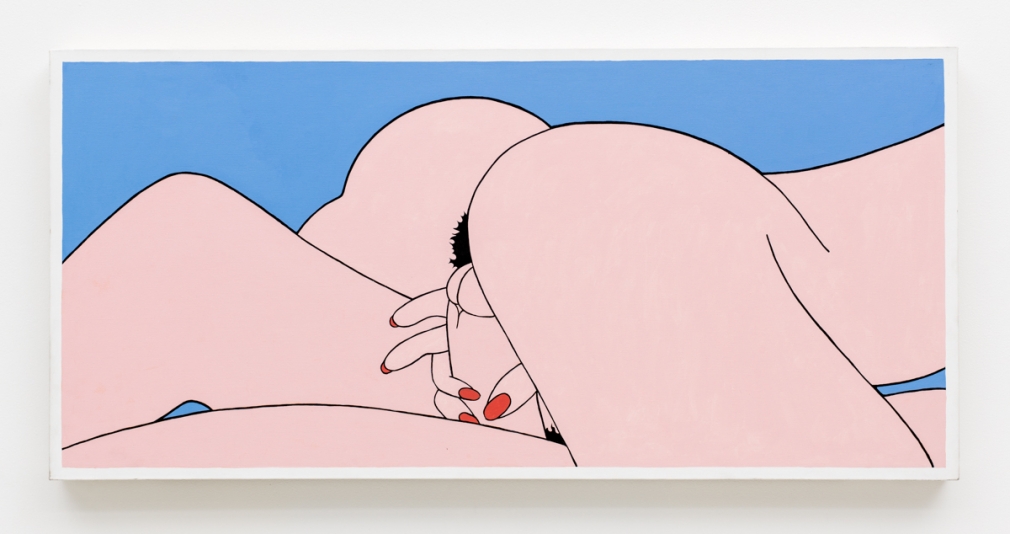 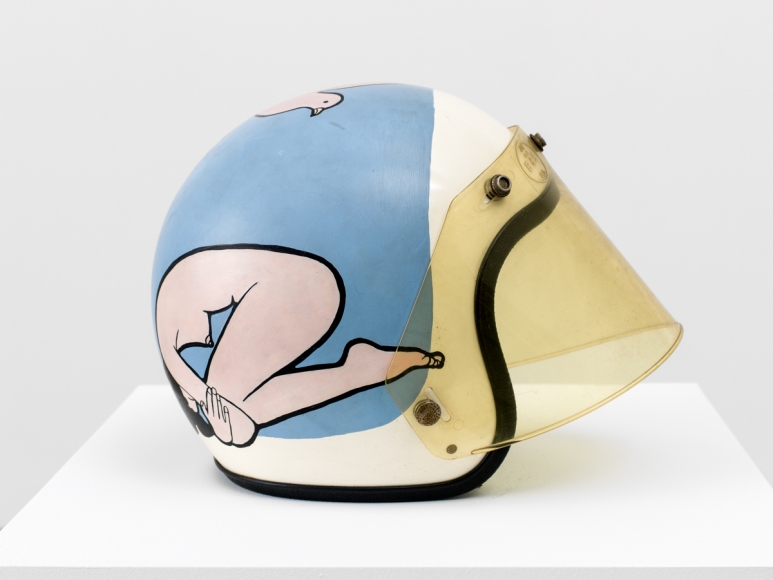 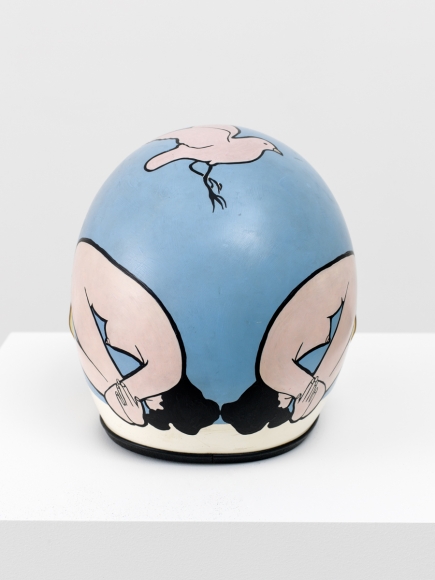 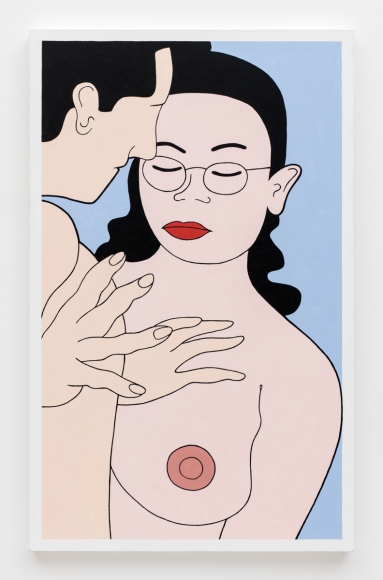 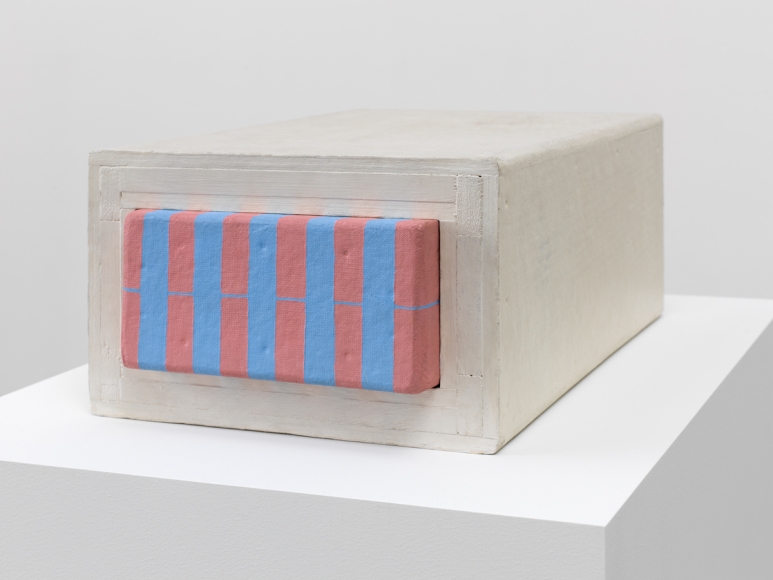 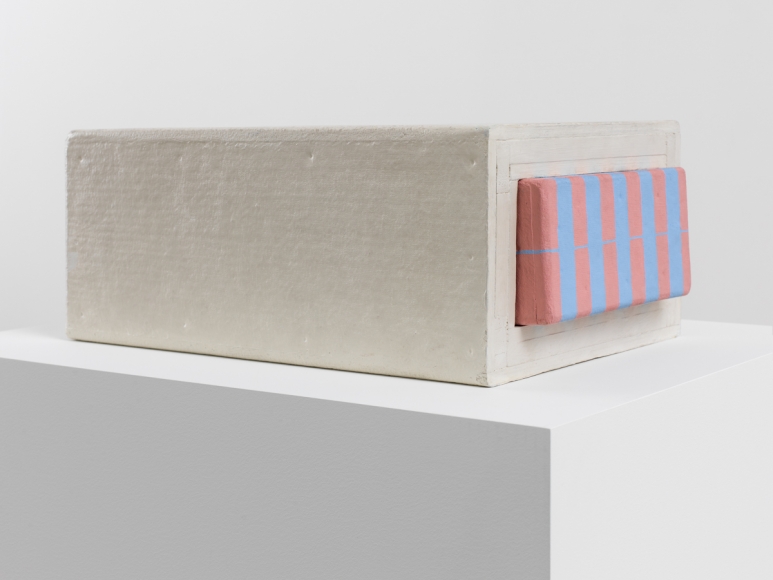 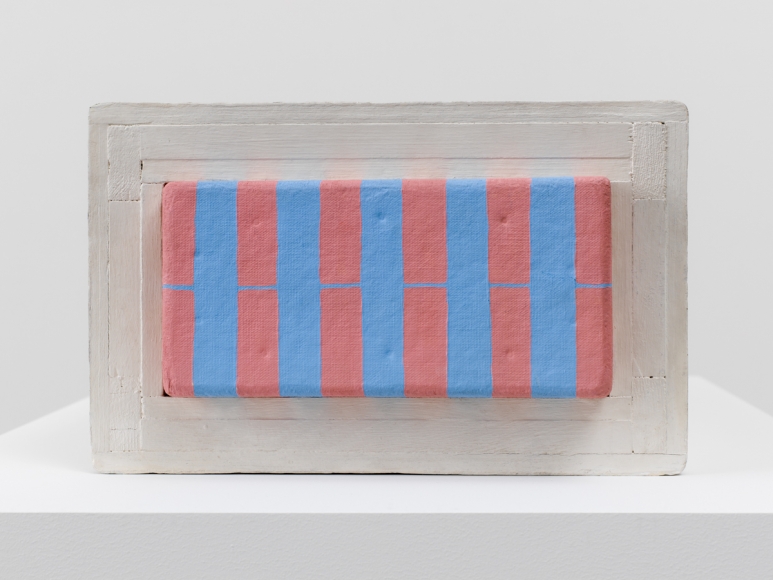 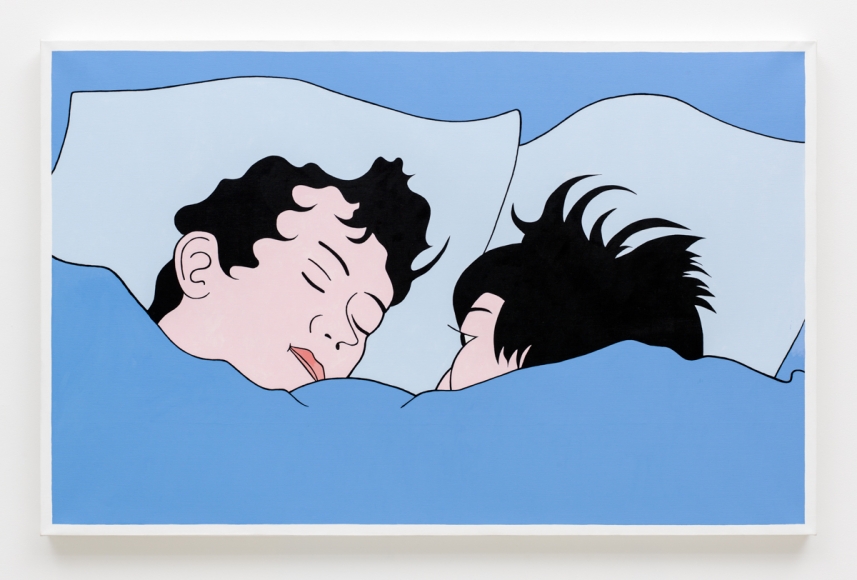 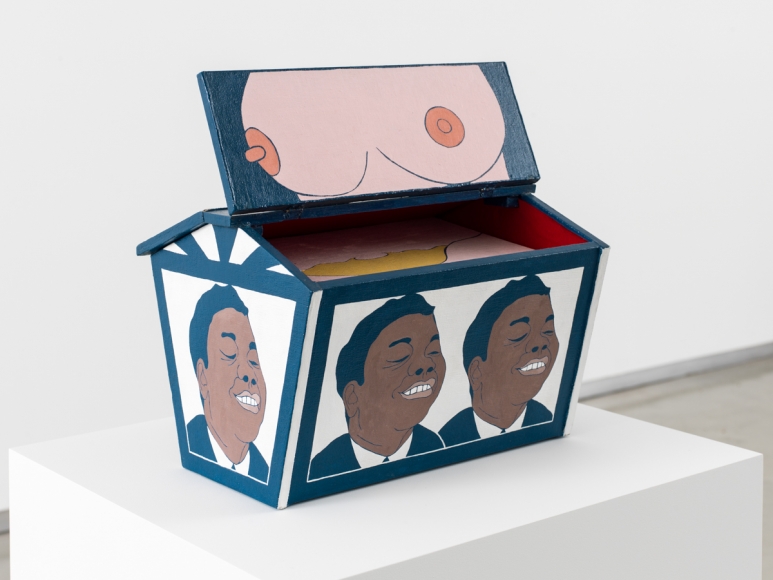 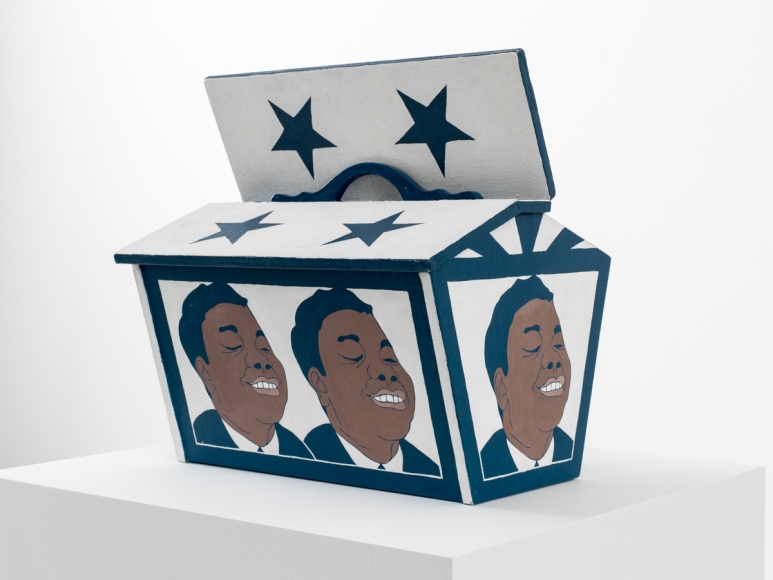 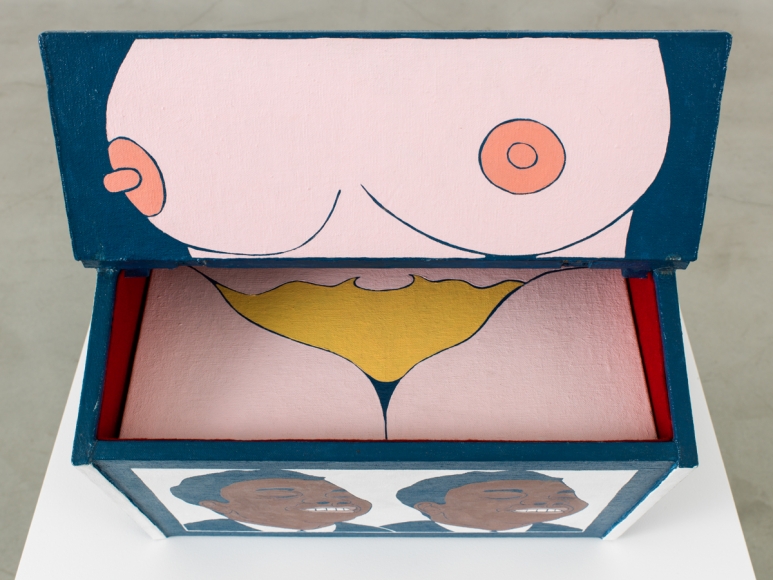 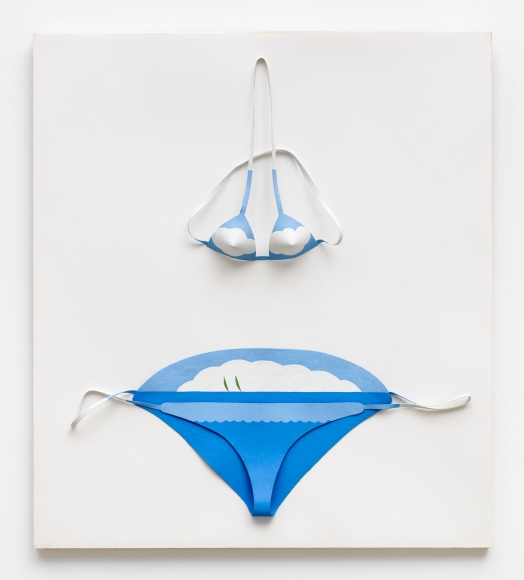 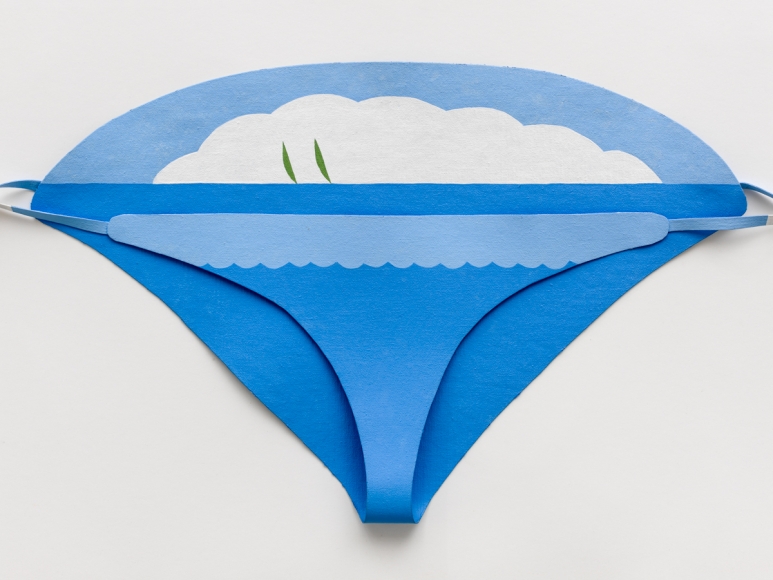 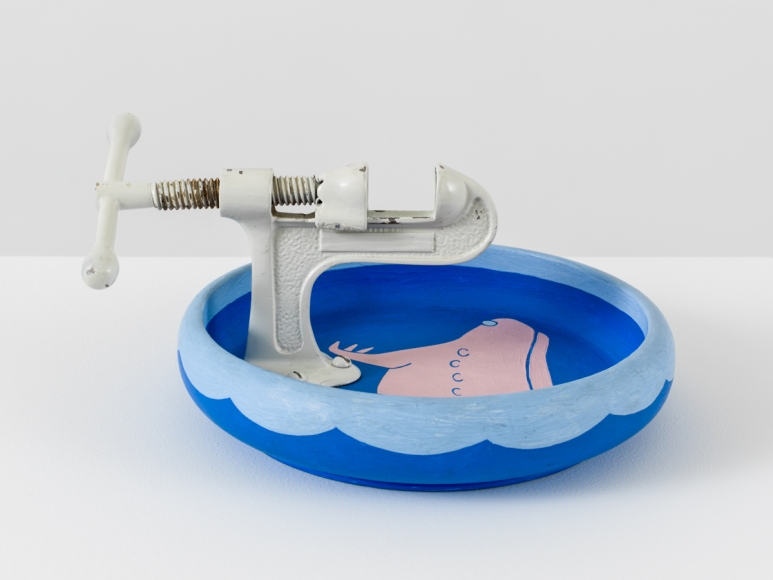 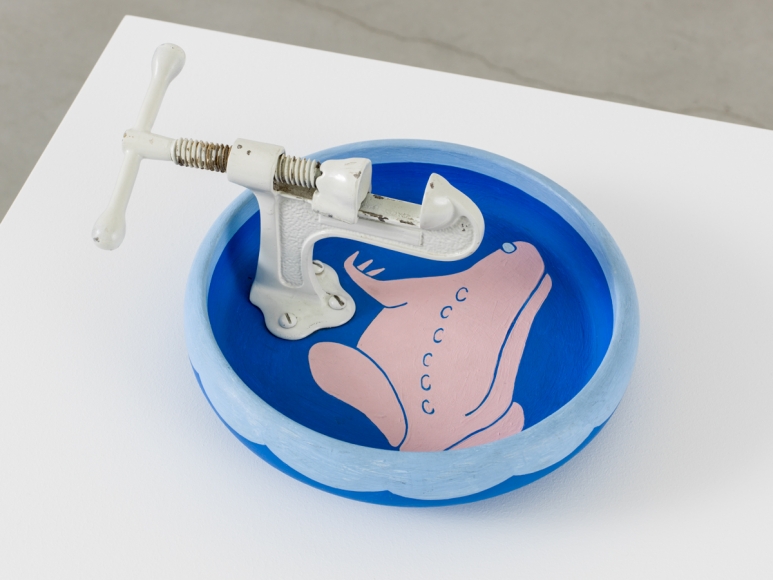 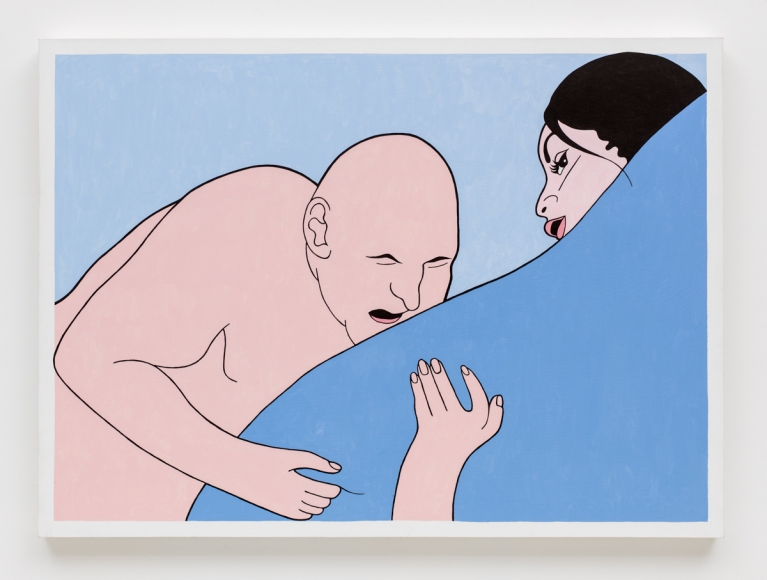 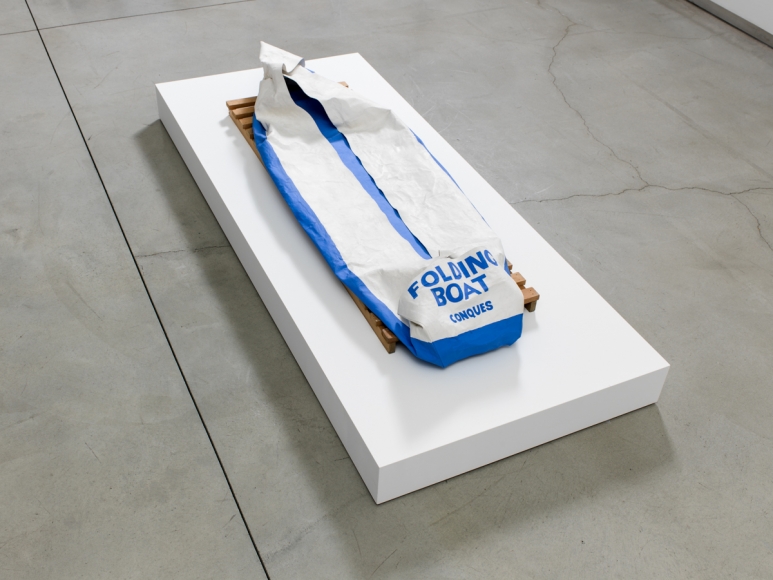 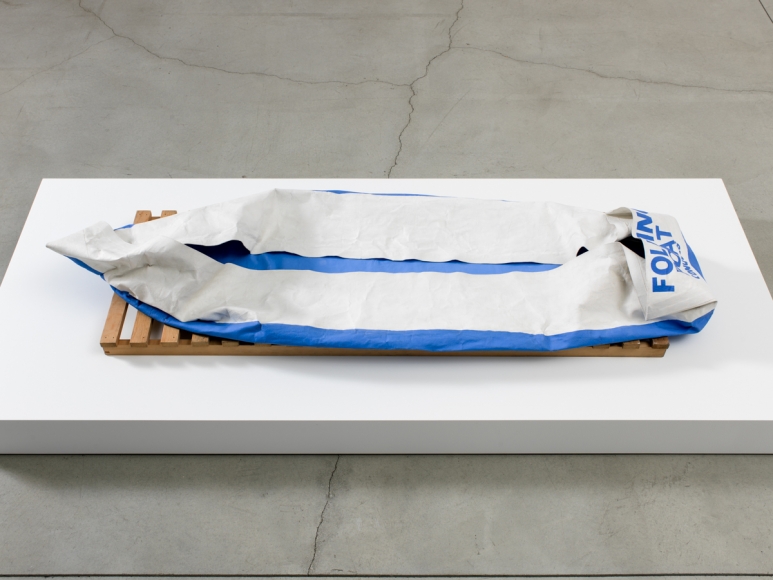 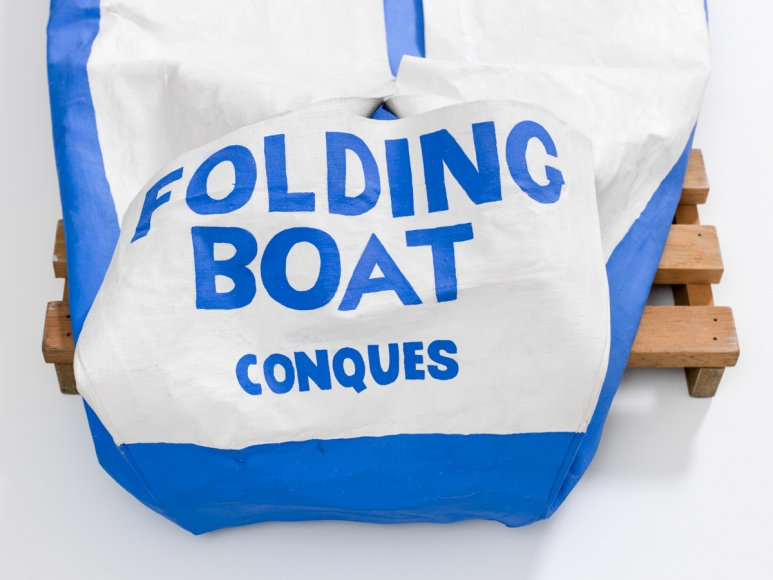 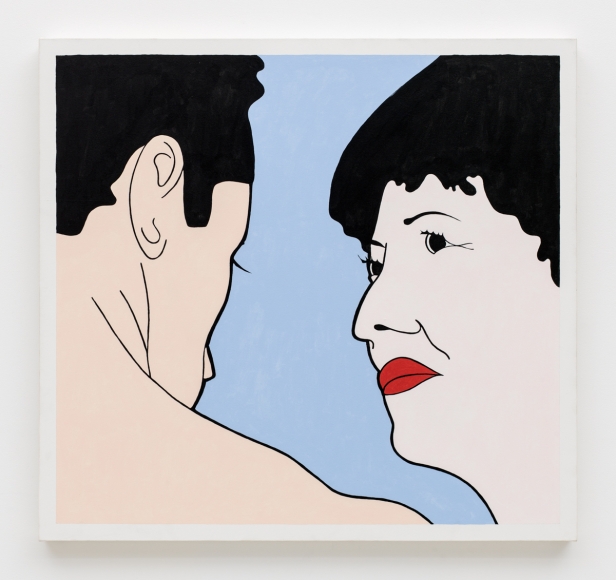 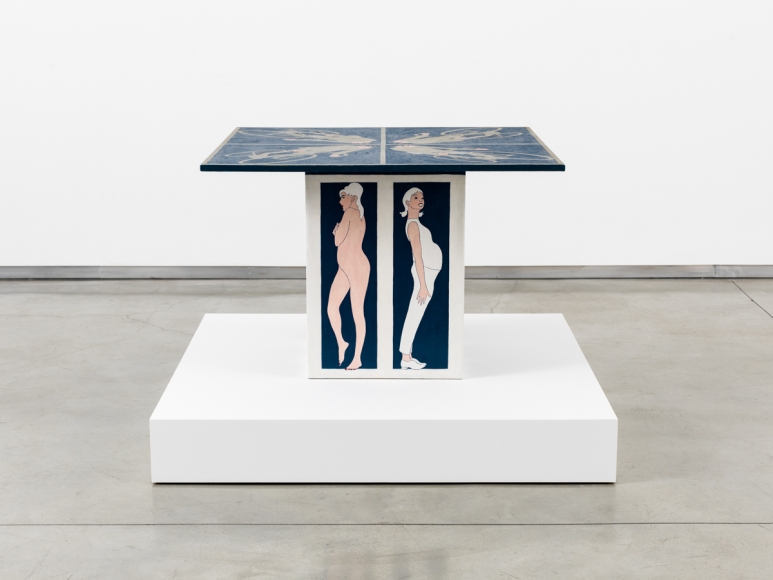 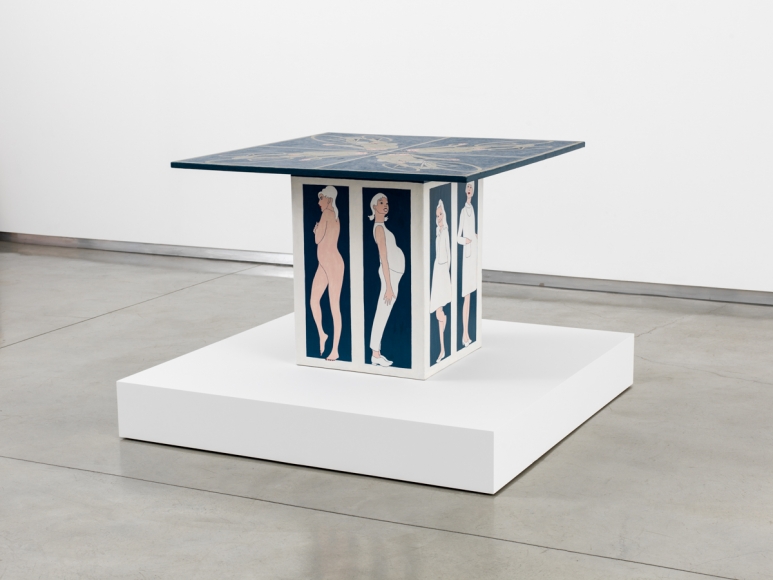 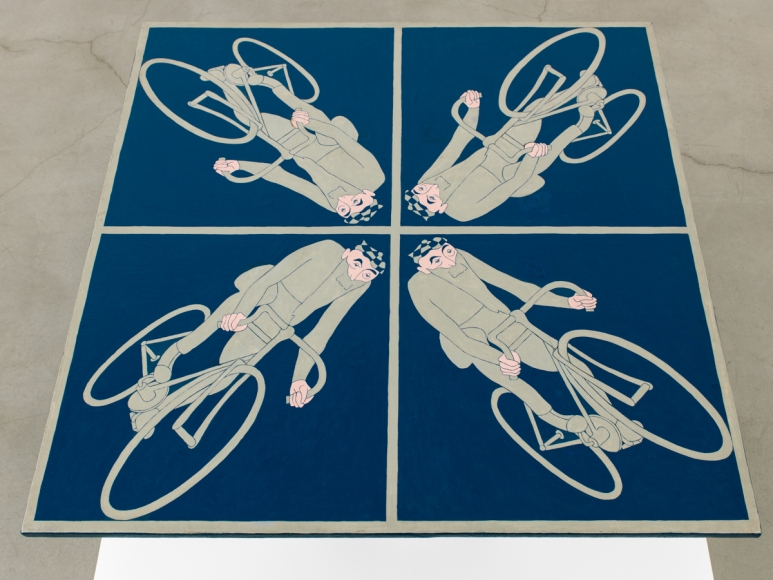 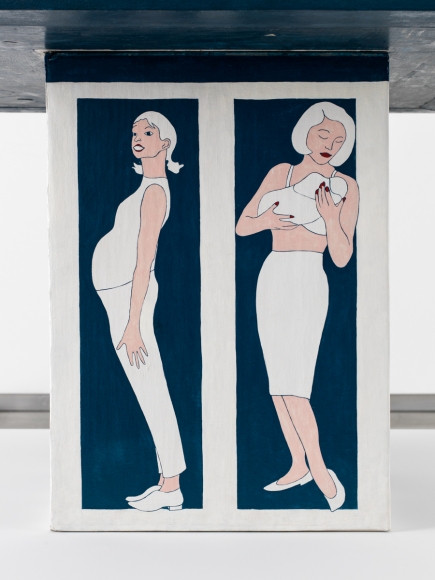 Elaborate good humor to downright damned foolishness in Western visible arts is scarce. Jack Wesley can deal them with weird eccentric precision––just about as well as any artist whom I know. And he has a long, irreverent history to prove it all. I salute you, dear Jack, as one hell of a sly wise painterly adept. So Paul Klee to you, good guy.
––Dan Flavin, in John Wesley Paintings, exhibition catalogue, The Chinati Foundation, Marfa, 1990.

David Kordansky Gallery is extremely pleased to announce Objects and Paintings, an exhibition of work by John Wesley. The exhibition opens on May 18 and runs through July 6; an opening reception will be held on Saturday, May 18 from 6:00 until 9:00 pm. This is the artist’s first exhibition at the gallery.

Objects and Paintings includes paintings and sculptures from several periods in Wesley’s career; all of them point to the “eccentric precision,” as Flavin described it, that has made him one of the most indispensible American artists of the post-war period. Over the course of his half-century career, Wesley has created an amalgamation of minimalist, surrealist, and pop vocabularies that taps into the cultural unconscious. His formal universe, which is predicated on patterning, seriality, and a particularly deliberate use of line and color, brings together references and images of all kinds.

As such, the rarely seen sculptures on view in the exhibition shed light on the paintings for which Wesley is best known. Essentially paintings in their own right, they provided the artist with the opportunity to apply his imagery to readymade objects. In Bird Lovers (1973), two of Wesley’s iconic pink females bow toward one another in perfect compositional symmetry while a pink bird hovers atop the blue expanse of a motorcycle helmet. The nude figures suggest a complex attitude toward eroticism: sulky, submissive, and titillating but also wild and free, tied to the moment’s easy rider counterculture.

In this regard, the objects become a means of further exploring the psychosexual motifs of Wesley’s work—extra hardware in his cultural toolbox. Other sculptures include two riffs on the bikini, a table, a nutcracker, and a ‘folding boat’ fashioned of unstructured canvas. The latter functions both as a pop-inflected soft form reminiscent of Oldenburg as well as a kind of critique of the unassailable status of the objective, neutral support in painting. Gestures like these show Wesley circumventing the grand narratives of modernist art historical development in order to create what Dave Hickey has described as a contemporary American form of allegory, “the restoration of traditional genre in cartoon drag.”

Chocolate Major, meanwhile, depicts the upper third of a nude woman against a preternaturally blue sky and a lawn of green grass. The lower part of her body is obscured by the flat brown bust of a man who, despite the economy with which he is rendered, peers out from the picture plane as if he were suspicious of the whole endeavor, whatever that endeavor might be. Wesley’s dream-like logic (puns, both visual and linguistic, are pervasive in the works themselves and their titles) puts forth a vernacular surrealism that takes culture at its word, and responds so literally to its prompts that its subjects emerge transformed, more familiar and more strange. Wesley’s figures, in all their ambiguity, are metaphors, avatars or vessels of a culture’s confused libido.

John Wesley’s work has been the subject of numerous solo exhibitions since the early 1960s. Surveys have been held at the Stedelijk Museum, Amsterdam; the Chinati Foundation, Marfa; MoMA PS1, Long Island City; the Fogg Art Museum at Harvard University, Cambridge, MA; and Kunsthalle Nuremberg, among other venues. In 2009, the Fondazione Prada presented a solo exhibition of Wesley’s work during the Venice Biennale, which was accompanied by an expansive catalog edited by Germano Celant. Since 2004, the Chinati Foundation has maintained a permanent gallery housing its collection of Wesley’s paintings, as was intended by Judd since the foundation’s inception. Wesley lives and works in New York.