David Kordansky Gallery is pleased to announce Olvera St., its first exhibition of new paintings by Ivan Morley. The show will open on November 2 and remain on view through December 15, 2018. An opening reception will take place on Friday, November 2 from 6:00pm until 8:00pm. Demonstrating the breadth of Morley's project, Olvera St. features several different typologies, including embroidered canvases, a glass painting, and a painting made on a tooled leather support. While full of material experiments, the exhibition also poses pointed questions about Los Angeles, the legacies of abstract expressionism, and the ability of art to measure the passage of time.

For more than 20 years, Ivan Morley has made paintings defined by his unlikely approach to craft and narrative. He employs seemingly "lower" techniques and materials, such as embroidery and glass painting; at the same time, he is the author of a strange but immediately recognizable set of images and stylistic modes. These arise from remembered and misremembered histories related to California's past. Morley's works are organized in groups, some of which span the entirety of his career and are ongoing; each painting represents a further distortion or abstraction of the narrative that gave rise to its group in the first place.

Most of the paintings in Olvera St. are part of a new group entitled Fandango, which becomes a clearinghouse for an interlocking series of stories, hypotheses, and visual cues associated with cultural shifts that have taken place in Los Angeles over the last 200 years. The exhibition's title makes this plain: Olvera Street is considered the first street in the downtown section of the city, and therefore symbolizes its establishment by Spanish settlers in the 18th century, even though the street itself was not named until 1877. Inspired by both factual and imagined anecdotes, Morley pursues divergent lines of inquiry related to 19th century Angeleno social life and food, Jackson Pollock and Philip Guston's formative years in the city and their documented interest in Mexican muralism, present-day observations of his native city, and revisionist takes on his own work.

The paintings themselves, however, are anything but exercises in nostalgia. Morley considers the research that drives them as merely another material, so that there is no hierarchy between the historical or literary aspects of his work and the physical labor that goes into producing them. By treating these distinct processes as part of a single continuum, he reveals himself to be part of a Los Angeles-based tradition: along with artists like Mike Kelley and Jim Shaw, whose projects distill language-based and formal investigations alike into idiosyncratic images and objects, Morley enacts an embodied, open-ended critique, rooting his freely associative tours through the Californian collective unconscious in precise--and often laborious--physical procedures.

The results are paintings of great visual subtlety, full of surprising color combinations that are nonetheless indebted to the inherent qualities of their materials. In the embroidered works Morley limits himself to the colors of the manufactured thread he employs. But because of the way these colors are arranged--he replicates a wide variety of marks, from Pollock-like splatters and swoops to representational signifiers and words--they take on complexities of tone and texture one expects to find in pictures made using pigment and medium.

The difference, of course, is that Morley creates his heterogeneous images at a remove, building them stitch by stitch, and the work's planning and meticulous construction therefore place it in conversation with sculpture and conceptual practices. A perceptual dissonance emerges, with emotion and intensity transposed from the sweep of the arm and the violent dispersal of paint to the methodical, close-up work of sewing. Part of the work's power derives from Morley's nuanced position vis-à-vis the history of painting, particularly its modernist varieties. Indeed, Pollock, Clyfford Still, and other supposed titans of 20th century art have made appearances both obvious and implied throughout his career, though they are treated less with reverence than with an acidic, anxious curiosity, brought down to size through the exacting nature of his craft.

To make one Fandango painting, for instance, Morley paints an intricate composition on glass; he then uses razors to painstakingly remove it in one piece before applying it to a panel. The side that was originally pressed against the glass now faces up, lending it an uncanny flatness that actively contradicts its teeming arrays of color (in a Brechtian flourish, the word "FACE" is scrawled in one corner, a reminder that the flatness is an illusion). In another he substitutes canvas with tooled leather, a material whose cowboy aesthetic lends the work a characteristically Western feel; dye is carefully applied with a dropper and then sinks, watercolor-like, into the natural hide support. These processes, which demand that materials and images be handled and seen from up close, become metaphors for the immediately tangible action--and effects--of history. As the paintings in the show orbit the geographical and historical point that is Olvera Street, they suggest that the piecing together of cultural narratives is an ongoing and non-linear event, subject not only to the vagaries of time, but to human whims and physical forces. 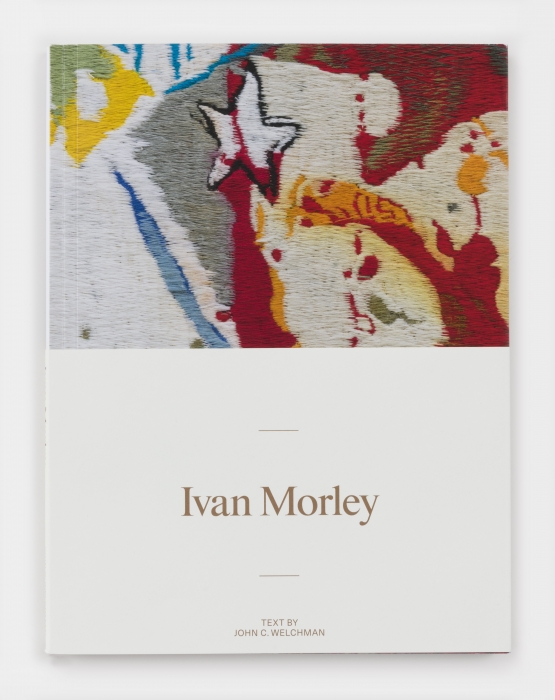